The satellites monitoring of coastline erosion 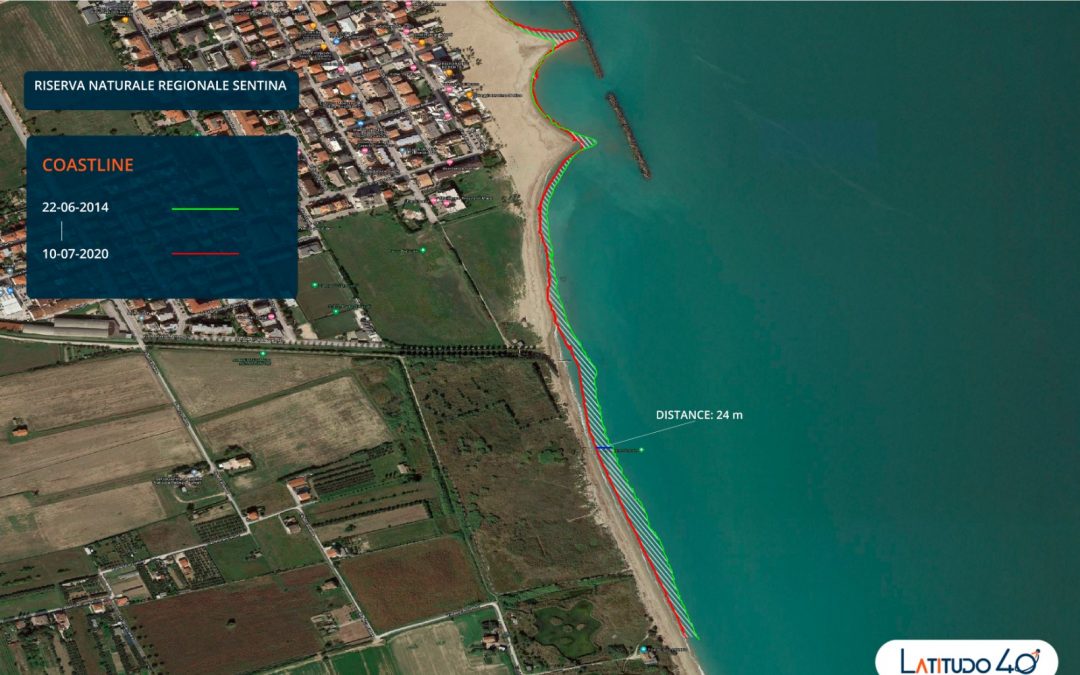 The coastline is the boundary between land and sea, which constantly changes its shape and position due to dynamic environmental conditions. Coastline change is mainly associated with waves, tides, winds, periodic storms, sea level changes, geomorphological processes of erosion and accretion, and human activities. The coastline also depicts recent formations and destruction that has occurred along the coast. Waves change the morphology of the coastline and form characteristic coastal landforms.

How does sea erosion shape the appearance of a coastline?

Shoreline erosion is a natural phenomenon, or man-made, that occurs in many parts of the world. This is nothing more than the continuous wear and tear of the land surface caused by ocean currents and waves that constantly hit the coast. Waves are one of the most visible erosional elements that can be seen. The energy of waves striking the shore can shift sedimentary rocks as the waves approach the shore and their recoil. Waves can break or grind off coastal rocks in a process known as abrasion. Waves can also erode sedimentary rocks onshore by friction or impact of rocks, pebbles and sand against each other. In addition, seawater can chemically attack rocks and sedimentary rocks in a process known as dissolution. These processes occur simultaneously under the influence of constant wave energy.

Whether the cause is due to natural or human activities, it has important effects on the populations who can no longer live close to the coastline and the infrastructure. The rate of erosion also depends on human action to strengthen the coastline.

Why satellites are useful?

Satellites, from early launches to the present moment, are observers whose “gaze” covers vast territories: continents, seas, areas where it is impossible to place ground probes, where it is difficult for scientists to reach. In addition, thanks to modern technology, devices have learned to “look” through clouds, ice and even the earth thanks to high-precision infrared cameras and aperture radars.

Some devices can record not only accurate data at the moment, but also signs of climate change: melting glaciers, changing sea levels, erosions. the content of gases in the atmosphere, especially CO2. One of the areas of application of satellites is the prevention of natural disasters, namely preparation for them and minimization of damage. Devices in low-earth orbit and analysis systems provide early warning of impending hurricanes, tsunamis, forest fires and even earthquakes, as well as transmit data on the intensity of the elements and the direction of movement.

The commercial sector for satellite monitoring of the Earth is also growing rapidly. According to experts, at the moment the market is estimated at $ 4.4 billion, and by 2027 this figure will grow to $ 6.3 billion. This perfectly demonstrates the interest of business in satellite monitoring, which can help not only in making a profit, but also in control for the impact of production on the environment.

Latitudo 40 uses the satellite technologies to track information on territories of thousands of kilometers. We provide the fastest and easiest solution to create and manage geospatial analysis applications.

Our algorithm applied to Very High Resolution images allows us to detect shoreline in a very short time giving the chance to clearly analyze changes during time and evaluate coastal nourishment actions.

Latitudo 40 can determine coastal erosion using images from space, by analyzing the evolution of coasts in the past 5 to 10 years. This helps municipalities and governments to take corrective actions and mitigate the risks due to the erosion.